On a narrow strip of beach on the northern coast of France, American assault troops, protected from enemy fire by chalk cliffs at the extreme left, assemble before moving into the interior of the continent. A landing craft, its gangway down, spews out additional infantrymen onto Omaha Beach, near Colleville-sur-Mer on 6 June 1944. LCI 83 was hit off Fox Green at 0830 hrs and was unable to land its men until about 1115 hrs. The soldiers are believed to be from the 3rd Battalion, 16th Regiment of the 1st US infantry Division or the 20th ECB. 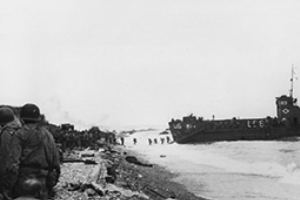 3rd Battalion, 16th Regiment of the 1st US infantry Division
£7.50
Your favourites have been updated. View your favourites by going here.